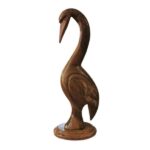 Precious and refined Heron small table sculpture, ideal as a wedding favor or gift idea. The red travertine is capable of giving personality and originality to structural creations, classic and modern coverings, but also decorative objects and furnishing elements.

It is an object entirely produced in Italy. Any imperfections and differences with the image are to be considered a guarantee of the uniqueness of the object and of the material.