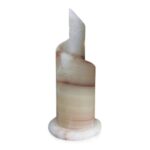 Onyx precious and elegant table lamp, with a typical natural striped appearance.
Onyx is a particular stone with a generally fairly uniform consistency, with the exception of this particular process which generally occurs in the form of uniform colored crusts or zoned with colored streaks of various shades.

Italy Handmade Any imperfections and differences with the image are to be considered a guarantee of the uniqueness of the object and of the material.