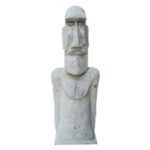 Impressive sculpture made by hand in concrete, with iron structure and treated with resins. Ideal for exteriors, but also perfect in interiors with a contemporary taste, the use of concrete is finding the favor of modern artists and designers.

The infamous Moai monoliths, symbol of the Island of Paqua, are shrouded in an aura of mystery and their history is lost in ancient legends. They are considered to be auspicious, protectors of the Earth and carriers of prosperity and abundance. A recent geological study found that the position of the statues has a significant correspondence with freshwater sources. One has reason to think that, citing an anthropological study, “they represented the divinized ancestors and celebrated the daily sharing of resources”: a sort of hymn to life and at the same time a thank you for what was received, recognizing the most precious good in water.