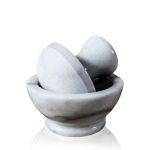 Functional and refined mortar made with classic white marble with typical veins.

Durable and elegant material that gives an original and modern look to a tool whose origins are very ancient.