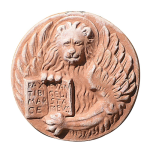 Decorative panel with hanging holes. Hand made in one size with Impruneta clay. Modeling made in high relief. Suitable for outdoor and indoor environments, resistant to any temperature and climatic condition, the shape remains unchanged over time.

Slight variations can be determined by the artistic workmanship and the use of natural material.