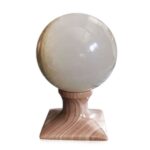 White Onyx Sphere with Base

White Onyx Sphere with Base

Refined White Onyx sphere Preciousness of the material and elegance of the shape come together in a unique, versatile and timeless object. Handmade

It is an article entirely produced in Italy. Any imperfections and differences with respect to the image are to be considered a guarantee of the uniqueness of the object and material.