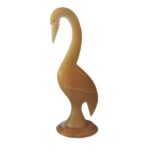 Precious and refined small table sculpture, perfect as a wedding favor or gift idea. The versatility of the material and color make it suitable for any environment, both classic and modern.

It is an object entirely produced in Italy. Any imperfections and differences with the image are to be considered a guarantee of the uniqueness of the object and of the material.